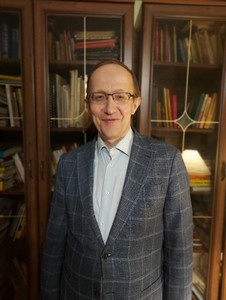 Associate Professor at the Department of Linguistic Pragmatics and Theory of Translation and Interpreting at the Jagiellonian University in Kraków. He received his Bachelor of Arts from Alliance College (Pennsylvania), and his Master of Arts degrees from Purdue University (Indiana) and the Jagiellonian University. In 2000, the Council of the Faculty of Philology of the Jagiellonian University awarded him his PhD and in 2019 his post-doctoral degree (habilitacja). His academic interests include interdisciplinary humour research in the context of cultural studies, cognitive linguistics, linguistic pragmatics, discourse studies and narratology as well as translation studies and business communication. He authored the first Polish-language monograph on humour research (O humorze poważnie) as well as over 60 articles related to humour studies, pragmatics and communication styles. He co-edited numerous monographs on humour, linguistics, intercultural communication, and communication styles in Polish and English, e.g. Style komunikacyjne [Communication Styles], Cognition in Language, Culture’s Software: Communication Styles and Humorous Discourse. He is co-editor of over 40 publications in the Language and Communication (Język a komunikacja) series as well as editor of the publication series Humour and Culture, which has so far yielded monographs (in English) on Polish, Hungarian and Romanian humour. He has lectured and presented his work around the world, including Germany, Portugal, Northern Ireland, Estonia, Romania, United States and Taiwan. He is a founder and co-editor of The European Journal of

Humour Research and Tertium Linguistic Journal / Półrocznik Językoznawczy Tertium, and board member of a number of international journals, including Humor. He is long-time President of Cracow Tertium Society for the Promotion of Language Studies and former Executive Board member of the International Society of Humor Studies (he was President of this Society from 2016 till 2018). He has participated in a number of international grants (e.g. Polish-Estonian, Visegrad, NETLANG (Portuguese), as well as in two UNA Europa grants; he is also the Principal Investigator of a CELSA grant and a Heritage PRA research group at the Jagiellonian University, and editor of the website: https://humorinpublic.eu/). Participant and/or organizer of many international and domestic scholarly conferences, e.g. organizer of a large ISHS conference in Kraków in 2012, co-organizer of a series of bi-annual national conferences entitled Language of the Third Millennium (Język trzeciego tysiąclecia) since 2000, as well as Communication Styles conferences, which until 2019 took part biannually in Krosno, where he has also been employed at the Department of English Philology of the Carpathian State College. He is also an active translator of numerous tourist publications, as well as scholarly articles and book-length studies in linguistics, literature, history or music theory.